The opportunity sometimes knocks on your door, I was busy in the studio as most days answering emails to peoples holiday questions, then a email came through from Peter hadfield who operates Grand Cru Fishing Charters in the Bay of Islands ….  “Would you like to join us to check out a couple of deep reefs on Tuesday” (14 th July 2020) there was no hesitation from my end with a quick response of YES !! after all I have been working hard and a day off the computer made it an easy decision along with thoughts of lots of sea air and maybe fish for dinner.

Checking out my Fishing tackle and my trusty 24 Kg stand up Alutecnos rod & reel used many times for fishing those deep reefs loaded with 24 kg braid line, I was ready.

We had an early 7:00 am departure from Opua Marina and a chance to meet my fellow local fishermen John Nicholas and Laurie England and with our skipper Peter at the helm along with his wife Helen it was coffees all round as we motored up the harbour under a grey but calm misty morning 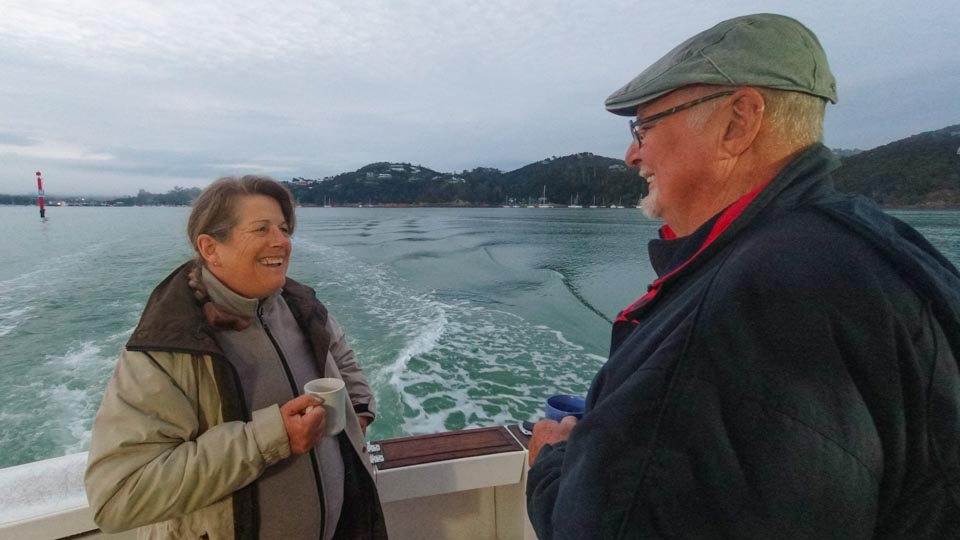 The Grand Cru is a 2004 Capricorn Cruzer overall length of 42 ft powered by twin 360 HP Volvo Turbo Diesels and a cruising speed of 22 knots it wasn’t long before we cruising past Nine Pin Rock and heading in a northerly direction towards our first deep water reef. Peter had recently acquired two electric Shimano Beastmaster reels loaded with 37 kg braided line and keen to try them out.

I was hesitant and reluctant to consider changing from my old faithful set up, but we to after always keep an open mind on new technology.

Arriving on our first reef John & Laurie were up for the first drop of 169 metres with my interest how the new Electric Shimano Beastmasters would perform as they lowered their baits at a fast speed but with no overruns, (Impressed) also having the meter reading out the depth as it plunged to the bottom reassured us that we didn’t have too much line out, using braid with its no stretch quality it was easy to find the ocean bottom, a couple of wind ups so we don’t snag the reef bottom ……  and we wait for the bites.

John N. was using smaller hooks hoping to catch Tarakihi and was hooked with the first fish but rewarded instead with a Pink Maomao a sort of sea perch normally found around reefs, (no photo’s were taken but edible). 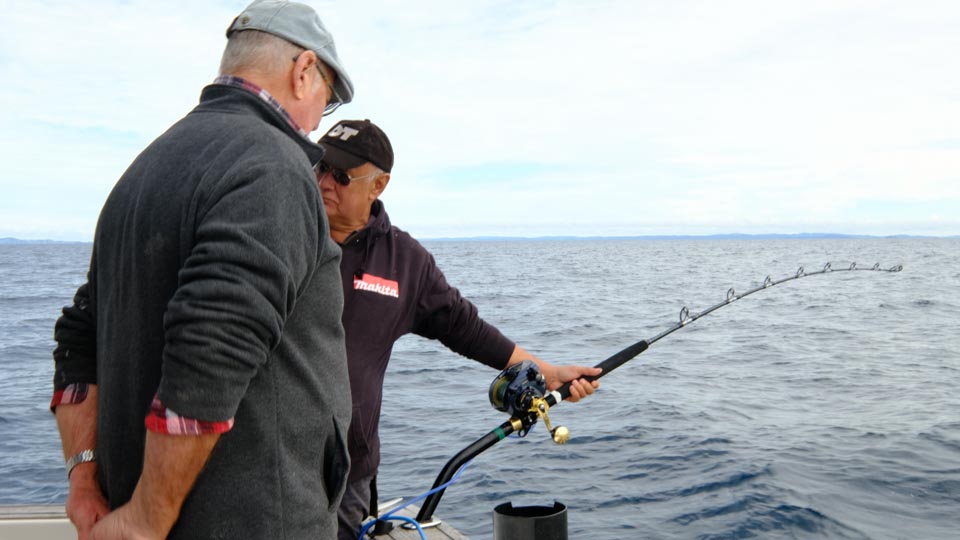 After a few more drifts and little improvement on fish size we moved to another of Peters chosen spots some 380 metres deep dropping off to over 430 metres. Having seen the electric reels in action I placed my rod & reel back in the cabin there was no room for exercise on this drop.

Setting up with larger hooks and 32 oz sinker I was in for my first drop whilst sipping coffee as the E-reel did its thing sinking to the darker depths, as soon as the rig hit the bottom I felt a strong bite and the rod load up. I lightly engaged retrieve and the reel did its thing slowly bringing the fish to the surface. Laurie then had a bite and it was looking like his one had more weight and a fish that was capable of taking line. A few minutes later my fish was on the surface our first Hapuku for the day, Followed by Laurie’s fish a nice size Bluenose. (I was beaten)